WE ARE YOUR KCNQ2 RESOURCE 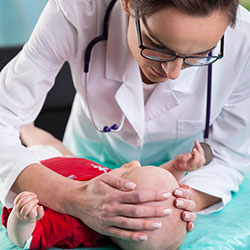 This is the portal for medical professionals to find the most up-to-date information about KCNQ2-related epilepsy. The goal is to provide an overview of available information on this emerging condition. If you have a patient with a potential or documented case of KCNQ2-related epilepsy, you’ll discover how to connect with researchers who are studying the condition and encourage your patient’s family to enroll in a study. We believe a collaborative approach is key to accelerating progress.

The KCNQ2 community is small, but it is growing. We are here to identify, support, and promote the work of researchers who are making headway toward new treatments and, ultimately, a cure. If there are additional resources you would like to find or share here, or if you have any other questions or comments, please contact us at info@kcnq2.org. This portal is a work in progress, and we would be glad to have your input.

What is the history of this condition?

Mutations in KCNQ2 can cause a clinical spectrum of epilepsy from benign to severe, referred to collectively as KCNQ2-related epilepsy.  In 1964, Drs. Rett and Teubel described an inherited neonatal-onset epilepsy syndrome based on observations from a single family.  Seizures typically began shortly after birth, remitted in the infantile period, and were usually followed by normal development.  The term “Benign Familial Neonatal Convulsions” (BFNC) was introduced a few years later.  In 1998, mutations in KCNQ2 were identified as the cause of epilepsy in these families.  Reports of more severe presentations of seizures and intellectual disability associated with KCNQ2 were published from 2003-2007.  In 2012, Weckhuysen et al. reported novel KCNQ2 mutations in previously undiagnosed infants with epileptic encephalopathy.  Since then, several case series of ‘KCNQ2 encephalopathy’ were published from centers around the world, and our understanding of this condition continues to grow.

What are the clinical findings in patients who have KCNQ2-related epilepsy, and what are the prognoses?

Clinicians should consider KCNQ2-related epilepsy in neonates with seizure onset in the neonatal period (usually first week of life) and without a definite cause.  Seizures are typically tonic and can have autonomic symptoms.  Although the seizure types at onset are similar, there are electroclinical features that help differentiate the self-limited BFNE form from the more severe KCNQ2 encephalopathy.

What treatments have been shown to be effective in controlling seizures? What new discoveries or treatments are on the horizon?

What kind of testing is available?

How can I contribute to KCNQ2-related epilepsy research?