When my brother Mike was 16 years old he sold subscriptions to the Boca News in the mall while wearing a pink flamingo costume. It was a hot pink plush thing that bubbled around his body—so cozy to wear in the South Florida heat, especially with the coordinating black tights that completed the ensemble.

But he did it because it was his job. He absorbed the pain of his situation—the sweaty physical discomfort, the social awkwardness among his peers (who thankfully couldn’t see his face through the huge beaked mask), the psychological distress. The pink flamingo stood tall. He learned perseverance, and he learned how not to take himself too seriously.

As an expectant father Mike had feared diapers. Many dads do. But when his son finally made it home from the hospital, Mike found himself not only changing diapers, but weighing and testing dirty ones, logging physiological details most parents don’t even think about, and holding his baby down to give him injections.

These were certainly not jobs he wanted. But he did them.

Jack, now seven years old, has suffered from seizures since hours after his birth. He has KCNQ2-related epilepsy, a rare genetic form of the disease that causes seizures, low muscle tone, and developmental delays. But no one knew that at first. For three long years doctors were perplexed about what was causing Jack’s troubles. Test after horrible test came back negative. It was Mike who kept us all buoyed up. We hung onto his sense of humor as if it were a life raft. “I’ll be okay as long as Mike can keep me laughing,” I remember my sister-in-law Liz saying between tears in a waiting room.

I know that wasn’t a job he wanted either. I know he didn’t want to have to be that funny guy, probably didn’t even think he could be. I’ve seen him down, too. I’ve seen him literally on the floor. The night after Jack was born and the nurse took Jack away to the NICU, Mike told me he slipped out of Liz’s recovery room after she finally fell asleep. He had a pain in his chest; he was afraid he was having a heart attack. He left Liz so that if he went down she wouldn’t have to be the one to find him.

On the day doctors told us that Jack might not live to see his first birthday, we stepped out of the hospital to get some air. Jack was about five weeks old. It was springtime and the Chicago snows were melting into slushy pools, swirling with debris and rainbows of oil. Mike’s weird humor came to the rescue yet again: “I’d get a giant straw, pull up a folding chair, and drink that whole puddle in one sitting if it would make Jack better,” he said.

Which is to say, he’d do whatever it takes to help his boy.

When the KCNQ2 diagnosis finally came, virtually zero information came with it. It was too new. There were no other cases in the literature for the doctors and nothing for us common folk on the internet. Mike and Liz felt very isolated, but doctors assured them that others had to be out there. With genetic testing becoming more available, Jack would not be alone for long.

So Mike and Liz started this foundation. They didn’t want any other family to have to go through that kind of isolation and fear. And they sure were looking for some company.

Now there are hundreds of other known KCNQ2-related cases and Jack has buddies
all over the world. Through the web and social media, the families lean on each other, share their stories, and lift each other up. The foundation is gaining strength in research dollars, partnerships, networking, and support. And scientists are making progress that they believe can help the greater epilepsy community.

This–all this extra special work–is not a job my brother wanted. He’s a high school history teacher, a coach, and a recovering diaper-phobic. He has also become a courageous, strong, and loving dad. Jack has a younger brother, and the two boys keep Mike very busy. I look at him sometimes and wonder how he does it. Of course Liz is a big part of it. But I think about the summer he was a pink flamingo and I wonder: maybe the things we would never eagerly choose in life prepare us for a future we cannot imagine. 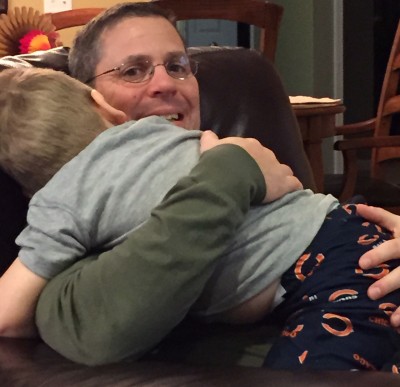