Wouldn’t it be great to better understand the relationship between daily activity, sleep, emotional state, medication adherence, and epilepsy symptoms?  Empatica’s new smartwatch, the Embrace, may be a useful tool in connecting those dots.

In our most recent issue of the Q2 News, Dr. John Millichap discussed the scientific background of the new technology. Read all about it here. The Embrace Alert System (Embrace watch and Alert app) detects and alerts to convulsive seizures, and a new clinical trial on the long-term effectiveness of this system will soon be underway. 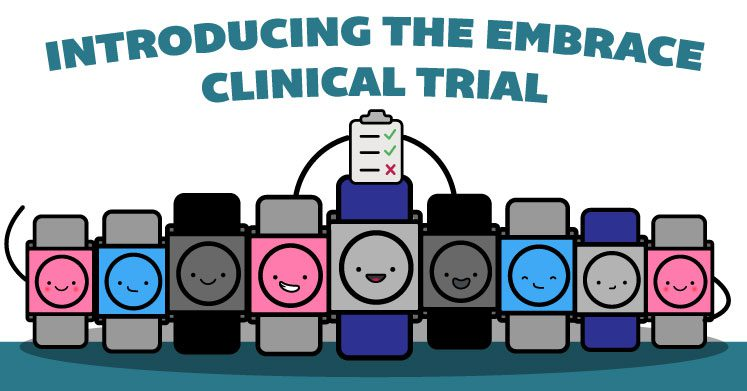 Empatica announced approval of their clinical trial “Embrace Seizure Characterization” on May 11, 2016.

So if you still want an Embrace  smartwatch, how can you get one?

To answer practical questions like this, I called on Empatica’s own David Bender, our “booth neighbor” for five days at the AES conference in Philadelphia. He was kind enough to answer some questions for us:

If a family missed the chance to get a free watch, how can they still get one?

The watch is still only available for pre-order at this time. Our production schedule is still ramping up to meet existing demand which we’re hoping to do by September 2016. We have validated the hardware design in preliminary usability studies this Spring with several hundred families and adults and were able to move ahead with the mass-production phase, meaning that the devices are now starting to ship.

Will there be any future opportunities to apply for a free Embrace?

We are incredibly grateful for the initial support of our Indiegogo crowd funders who sponsored give-one-get-one packages, which lead to 1540 donated devices that are being distributed in collaboration with the Epilepsy Foundation. At the moment our focus is on meeting the release schedules, and we do not have any current sponsors for free Embraces. We anticipate that once all back-orders are shipped and Embrace is in stock we’ll be in a good position to support more sponsorship programs. We’re also trying to keep the price of the system low (under $200) which we hope is affordable for most families until insurance reimbursement models are in place.

How can families enroll in the clinical trial?

Any individual who is scheduled to receive an Embrace watch will receive an invitation to enroll in the clinical trial through their Empatica Account. The enrollment process involves a screening (for example, we’re only enrolling US residents who are fluent in English and are not pregnant or planning to become pregnant at this time) as well as an informed consent review which families should review and ask questions about if there is anything unclear. Once informed consent is established the family can install the Empatica Alert app. Folks who do not wish to enroll can still use Embrace without the Alert app for the quantified self functionality (Empatica Mate app has sleep, autonomic stress, and activity reports, med reminders, and can be used as a context-rich seizure diary). For folks who are outside the US we’re working on a separate regulatory strategy for each region. We will make more announcements in the future so please stay tuned! For more info on the US trial please see our Embrace support pages: https://support.empatica.com/hc/en-us/categories/200310325-Embrace-watch