Into the Epilepsiome: An interview with Dr. Ingo Helbig

By all accounts, KCNQ2 is getting serious attention. On New Year’s Eve 2015, Dr. Ingo Helbig, one of the authors of the blog Beyond the Ion Channel, recapped his top ten posts for the year (hopefully while wearing a party hat and sipping a little bubbly). KCNQ2 came in at #10, and he wrote that KCNQ2 “may be the most common genetic cause of neonatal epileptic encephalopathies.” For any family who has ever felt alone with a KCNQ2 diagnosis, that’s a pretty incredible thing to read. It spurred me to ask for Dr. Helbig’s perspective for KCNQ2 Perspectives, and he has graciously obliged.

You have invented this new term, Epilepsiome. Please tell us what the Epilepsiome is and how researchers and clinicians can use it.

The Epilepsiome is the community-based gene curation effort of the epilepsy world. Basically, the Epilepsiome project aims to review and curate data on all relevant epilepsy genes, especially involving scientists and clinicians who work on the particular genes. The goal is to provide you with an up-to-date overview that will then link out to the other resource such as ClinGen, ClinVar, GeneReviews, or OMIM. However, in contrast to these resources (which are used widely in genetic studies), the Epilepsiome will have a clear focus on epilepsy and will put the current findings and controversies into context. My vision was to carry some blogging atmosphere over to a gene curation project, which typically engages the community more than a static page that is only updated infrequently.

The Epilepsiome is growing. We are building expert groups for particular genes and we are very fortunate to have a dedicated group of scientists and clinicians on board to add to our gene curation. We aim to have the main genes for genetic epilepsies reviewed in 2016–and yes, there is already a KCNQ2 page maintained by some of the experts in the field that are part of your community.

In your New Year’s Eve 2015 post you wrote: “In many ways, KCNQ2 is one of our model genetic diseases, with a tightly connected group of researchers, clinicians, and patient organization. We hope that we can spin this energy into novel approaches for precision medicine soon.” Can you tell our readers what you mean by precision medicine and how the KCNQ2 community might be able to contribute to, or benefit from, it?

I knew that you would pick up on this! I must say that I am really impressed by the KCNQ2 community, which connects families, clinicians, and researchers. The vision of precision medicine is to use our knowledge of the genetic causes to find custom treatments, which may either be known medications that we did not think of yet or new compounds that were designed for specific disorders. 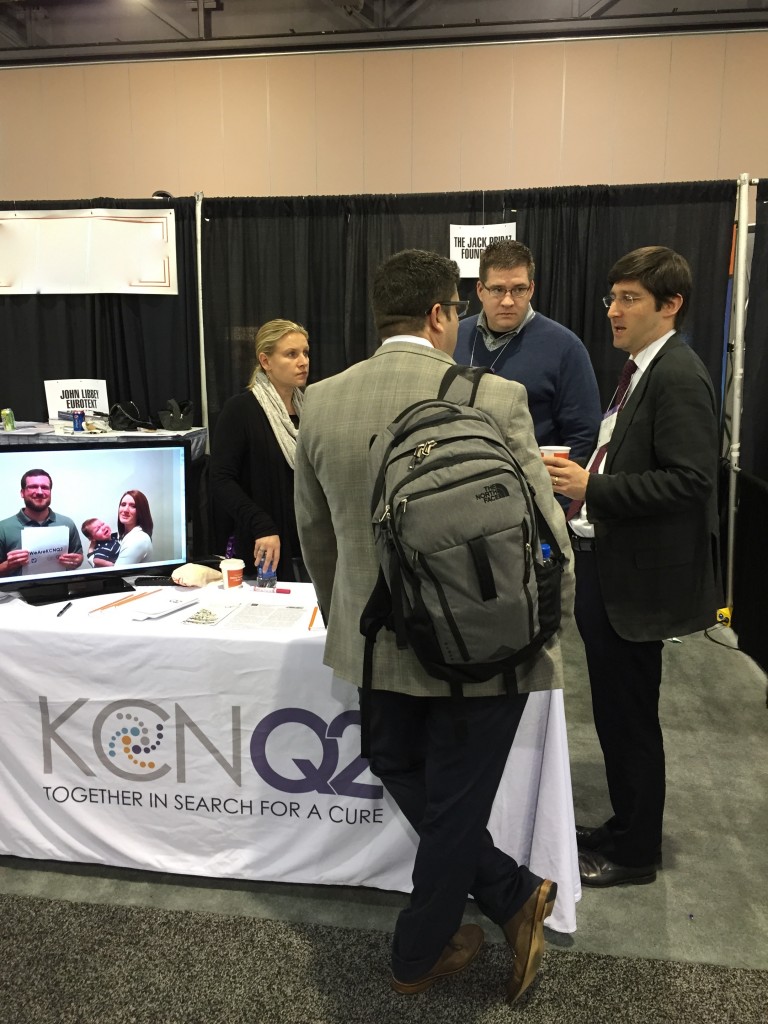 We feel that this approach may be promising as we are facing two fundamental problems in many severe epilepsies. First, seizures in these epilepsies are often difficult to treat and secondly, other than controlling seizures, our treatment strategies often have little impact on the developmental outcome. Precision medicine or personalized medicine aims to identify the cause of the epilepsy first. For patients with KCNQ2 encephalopathy, this is often a mutation that renders the potassium channel non-functional. The idea of precision medicine is to find model systems that replicate this defect and then systematically search for compounds that may correct it. A closely-knit community as the KCNQ2 community will be required to make sure that future treatment options can quickly be translated to clinical trials. Many people underestimate the efforts of finding patients with rare diseases for trials, and I feel that having the community organized is a prerequisite for this.

A closely-knit community as the KCNQ2 community will be required to make sure that future treatment options can quickly be translated to clinical trials.–IH

For parents of children suffering seizures and other effects of a genetic mutation, no science can ever move fast enough to find a cure or better treatment. What does that timeline for precision medicine advances look like?

Unfortunately, it is difficult to provide timelines for this. In many aspects, we are still not at the stage yet where generating model systems and testing of a wide range of possible candidate drugs is a predictable pipeline. Having said this, there is considerable effort dedicated towards finding therapies for patients with ion channel diseases.

There is one additional aspect to treatment of genetic epilepsies that I would like to mention at this point. You mentioned the word “cure.” While both families and clinicians often expect the scientific community to come up with game-changing interventions that significantly alter the course of the disease, a different strategy is to systematically focus on exploiting small gains in the field.

Take the pediatric leukemia field as an example. Even though many individual chemotherapy and radiation therapies have increased survival, it was only the thoughtful combination of therapies and systematic adaptation of protocols based on prior experience that has led to the significant increase in cure rates that we see today. Translating this to genetic epilepsies, I feel that we already can learn a lot from existing experience, but access to that data, how best to aggregate it while protecting patient privacy, and the possibility to mine this information are major issues.

Until recently, public discussion of scientific ideas was the purview of peer reviewed articles and books. The internet, and especially blogs like Beyond the Ion Channel, have created new space for sharing ideas and debate. As a scientist-blogger, what do you see as the benefits and risks of these new public platforms?

Basically, these public platforms serve as the communication backbone of communities that are not represented in the traditional publishing format. The main benefit of these platforms is that they provide a “running commentary” on what is happening in the area; they help put novel and existing information into context. I have always felt that we are piecing together the puzzle of an ongoing mystery, the genetic architecture of a disease. And we are trying not only to look at whether the pieces fit, but also to present the bigger picture on what they contribute. Another big advantage of these platforms is the fact that they are updated regularly in small increments as they follow the rhythm of social media. This is different to the traditional format where only the final product is presented. Through these platforms, we are able to follow the thought process and generation of ideas, which gives us the possibility to interact and contribute. Finally, I have also felt the effects of blogging personally. It is a way for me to clear my mind and experiment with novel ideas. It’s the thing that keeps me up at 3AM.

With regards to risks, especially for online platforms that develop a certain authority in a healthcare-related area such as the rare disease space, you have to be very careful that the information on treatment and prognosis that you provide is solid and agreed upon by the community. We are currently in the process of adding a “Personalized Medicine” subsection for our gene reviews and have the discussion in the community on what constitutes reliable information that can be displayed in this section. This is particularly difficult given the publication lag in this field–there is much knowledge and experience in the community that is unpublished and representing this adequately remains a challenge.

How did you first become interested in the study of genetic epilepsies?

During my medical doctoral thesis in Heidelberg, Germany, I worked on neuronal gap junctions or “electrical synapses,” direct cell-to-cell connections between neurons. This type of communication between nerve cells had been forgotten for a long time, but was rediscovered in the early 2000s, and we characterized the proteins that were involved. At one point, we speculated that mice deficient in one of the critical proteins called Connexin 36 may have a reduced threshold for seizures, as this protein was thought to enhance the connection between so-called inhibitory cells (neurons that are typically involved in reducing the activity of other neurons).

We could not validate this hypothesis and actually found the opposite. We also tried to assess whether variants in this gene may predispose to epilepsy, but there was nothing to be found. Independent of my disappointment, this started my interest in genes that predispose to epilepsy and also left me with a fundamental skepticism of falling in love with any particular hypothesis too much. On our blog, I am often referring to the power of team science and hypothesis-free approaches in genetics, which is somewhat a reference to my earlier disappointments.

Independent of my disappointment, this started my interest in genes that predispose to epilepsy and also left me with a fundamental skepticism of falling in love with any particular hypothesis too much.–IH

My other “key moment” happened during a trip to Australia when I interviewed for positions in various fields, some of which did not include epilepsy at all. As I mentioned in a post last year, I was sitting in a rock pool at Red Johanna Beach in Victoria, Australia, reading Nigel Tan’s “The truth is out there,” a 2004 review on the state of association studies in epilepsy. The writing style and big picture view of his review made me realize that epilepsy genetics is something that I might actually be interested in. I typically publish a post “Red Johanna Day” every year, which I consider my birthday in epilepsy genetics.

These two stories were my early beginnings. In retrospect, I think it is interesting how my strong clinical interest in genetic epilepsies was born out of a primarily scientific interest. The clinical part was something that I learned and became fully invested in while getting involved in patient care. To me, being a clinician and a scientist is an interesting combination that allows me have both the care of the individual patient and the larger picture in mind.

Have you registered your child or patient in the KCNQ2 patient registry? Access RIKEE here to help the KCNQ2 community. 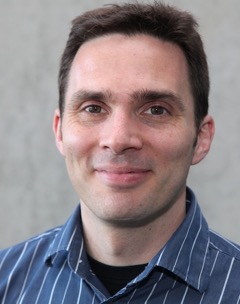 Ingo Helbig, MD, is a member of the Genetics Commission of the International League Against Epilepsy (ILAE) and epilepsy genetics researcher. Ingo trained as a pediatrician and child neurologist at the Department of Neuropediatrics, Kiel, Germany, and is currently a child neurology fellow in the Division of Neurology at the Children’s Hospital of Philadelphia. His research group has contributed to many of the recent gene finding in human epilepsies. Ingo blogs about epilepsy and genes on Beyond the Ion Channel.