It’s a two-way street. The Rational Intervention for KCNQ2 Epileptic Encephalopathy (RIKEE) patient registry both provides valuable information and accepts the input of new data from volunteers, creating a powerful collaborative resource to help families, physicians, and researchers. Just ask Dr. Sarah Mulkey. Dr. Mulkey is an Assistant Professor in the Department of Pediatrics, Section of Neurology, at the University of Arkansas for Medical Sciences. She was caring for a newborn whose clinical presentation was like none she’d seen before, and RIKEE came to the rescue. The parents of Dr. Mulkey’s young patient later agreed to have their child participate in the RIKEE registry, a decision that set in motion a detailed reexamination of the histories of patients with similar stories diagnosed around the world.

Thank you, Dr. Mulkey, for sharing your insights with KCNQ2 Perspectives.

Just after birth, a baby was having movements that looked like seizures. The infant was brought to our neonatal intensive care unit, where I work as a neonatal neurologist. The baby appeared ill, but brain imaging did not reveal a reason. Although the brain wave test (or EEG) was far from normal, it showed that the baby’s movements were not caused by seizures–in fact I could find no real seizures at all. This was a highly unusual pattern. Although I suspected there might be an underlying genetic cause for the baby’s illness, the combination of symptoms and test results was different from any patient that I had previously encountered. I decided to email Dr. Phillip Pearl in Boston, a renown expert in genetic metabolic epilepsy in children, to seek his advice.

Learn all about RIKEE and how to get involved at www.rikee.org

Suspecting a genetic-related epilepsy and possibly KCNQ2, Dr. Pearl put me in contact with neurologists Dr. Ed Cooper in Houston and Dr. Roberta Cilio in San Francisco. Genetic testing indeed revealed a KCNQ2 variant. The RIKEE database also informed us that there were several other families and treating physicians participating in research that had referred children with the very same variant as found in my patient. As permitted under the RIKEE research protocol, we contacted all the treating physicians and all agreed to form a new, international collaborative team. Although the research is ongoing, overall we have learned that the patients have many similarities with each other and are different in important respects from patients with some other KCNQ2 variants. We believe this new understanding will help us design new treatment strategies, which in this instance would be tailored to not only to KCNQ2, but to an individual KCNQ2 variant.

Only the existence of the RIKEE database and its contributing network of families, scientists and physicians allowed me to gain a real understanding of my patient’s situation. This experience showed me that it is important to build such networks of colleagues for rare illnesses so that we can combine our knowledge and advance science to provide the best care.

Adding to the registry

I also recently took care of another newborn whose history fit with the definition of benign familial neonatal epilepsy (BFNE). Like most other babies with BFNE, my patient had neonatal seizures that were easily controlled with medicine, and the baby showed normal developmental progress.  Because KCNQ2 variants are the most frequent cause of BFNE, it was not a great surprise when testing revealed a KCNQ2 variant. Based on research conducted by the RIKEE team, Dr. Cooper explained that, because of the location of the variant within KCNQ2, additional specialized genetic testing might be warranted. I contacted the genetic testing service and requested the additional analysis be performed, leading to a revised diagnosis. This provides another example of how the RIKEE database can increase understanding of these variants and improve care for individuals and their families.

Sharing what we learn

As a result of this fruitful collaboration, Dr. Cooper invited me to attend the KCNQ2 investigators’ meeting at AES (read a recap of that meeting in the Q2 News). I was able to share my experience in caring for these patients with other researchers that are working on different aspects of KCNQ2. It was inspiring to spend a day with other dedicated clinicians and neuroscientists focused in KCNQ2-related epilepsy research. I believe it is multi-disciplinary collaborations like this that will be able to make pivotal discoveries and improve the lives of patients with genetic epilepsies. I look forward to continuing these team efforts on KCNQ2.

Register in RIKEE to advance KCNQ2 research and speed the path to better treatments. 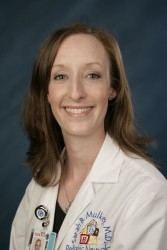 Sarah Mulkey, MD, PhD, graduated with her medical degree at the Florida State University College of Medicine and completed her child neurology residency training at the University of Arkansas for Medical Sciences. She focuses her clinical work on caring for newborns with different types of neurologic conditions. She has a PhD in clinical research and works to find treatments for newborn brain injury and improve neurologic outcomes for babies. Outside of work, she keeps busy with her three young children ages 2, 4, and 7.